Birding in the Bay Area

This month’s insight is brought to you by Dominik Mosur, Randall Museum Animal Keeper and Birder Extraordinaire.

“Birding or birdwatching is many things to many people. For most it is a pleasurable hobby, for some it is an often competitive game and for a few it becomes a study of life itself.

This afternoon, after a day of basketball, spotting “rare”cars, swimming and watching cartoons, I dropped my 9 year old son off with his great-grandparents for the upcoming work week. With 3 hours of daylight I decided to get in some bird observing time at one of my favorite spots in the central Napa Valley.

At Yountville Crossroad, about 100 meters west of the River, just outside the Napa River Ecological Reserve, I was intently watching and listening to (3) Chipping Sparrows. This species winters from Southern California into Mexico and Arizona and arrives on its nesting grounds in the central Napa Valley by middle of March. It is now very localized as a breeding species on the valley floor, and has been extirpated from many sites by habitat destruction. I have been detecting Chipping Sparrows singing in this area from around March 15th and remaining through August and sometimes September since 2011. It was good to see these migratory creatures still continuing their life at this little spot of the planet in 2017.

Soon my attention was drawn across the road to another interesting sight. A pair of Western Bluebirds were busy delivering food to their brood, living inside a nesting box mounted about 2.5 meters off the ground on a utility pole. Bluebirds are still a relatively common sight in the Napa Valley, much more so than Chipping Sparrows. Despite this I cannot resist focusing on brilliant blue and rufous male Western Bluebird gracefully swooping in to feed its babies. On one such swoop I watched with initially pleasing astonishment as the male, instead flying up to the box, landed at the edge of the vine row and delivered a food morsel to a loudly begging juvenile sitting in the dirt (pictured below.)

Pleasure quickly turned to alarm when I realized the youngster was far too young to be out of the nest.

The afternoon wind was intensifying; a Common Raven, looking fat from fancy restaurant dumpster leftovers, was slowly walking in the dirt field across the road.

If I didn’t act, cold or predation would kill this young bluebird before dawn. Some have speculated that birds that fall out of nests are inherently flawed and rarely survive to reproduce anyway. But here was a breathing, begging creature that would surely die if I left it to fate.

I texted great-grandpa and let him know I was on my way back to borrow his ladder. And then, as an afterthought, I told him to get the boy ready.

Now with son and ladder, we raced back to the spot near the river as fast as people and physics laws allowed. We ran the ladder across Yountville Crossroad and propped it against the pole, then proceeded to look for the nestling. I pointed under the grapevine where I had photographed it, but it was gone. We started frantically searching the ground a around us, me cautioning him to step carefully. After several minutes with no luck and the pressure of the setting sun, rising winds and potential for getting hit with a Trespass citation, I started to lose hope.

Maybe something ate it I said. The boy looked around a few more times, then, despondent stood next to me as I said it was time to head back. As I grabbed the ladder to carry it back to the truck I looked down. There at the base of the utility pole was the baby bluebird.

Despite its undeveloped wings it had managed to hop, several meters from where I had first found it, in the direction of its calling siblings. In its flightless state it had gotten as far as it could.

We whopped for joy and then I held the ladder as my son climbed up one-handed, cradling the baby bluebird in the other.

He reached up and gently maneuvered it back into the cavity. On descent we hi-fived, hard!

Heading home he asked me if Bluebirds were rare. Not that rare in Napa I told him, they’re still surviving in some places. But someone saving one’s life and putting it back in the nest, that’s rare.

He’ll never look at birds the same way again, and neither will I.” 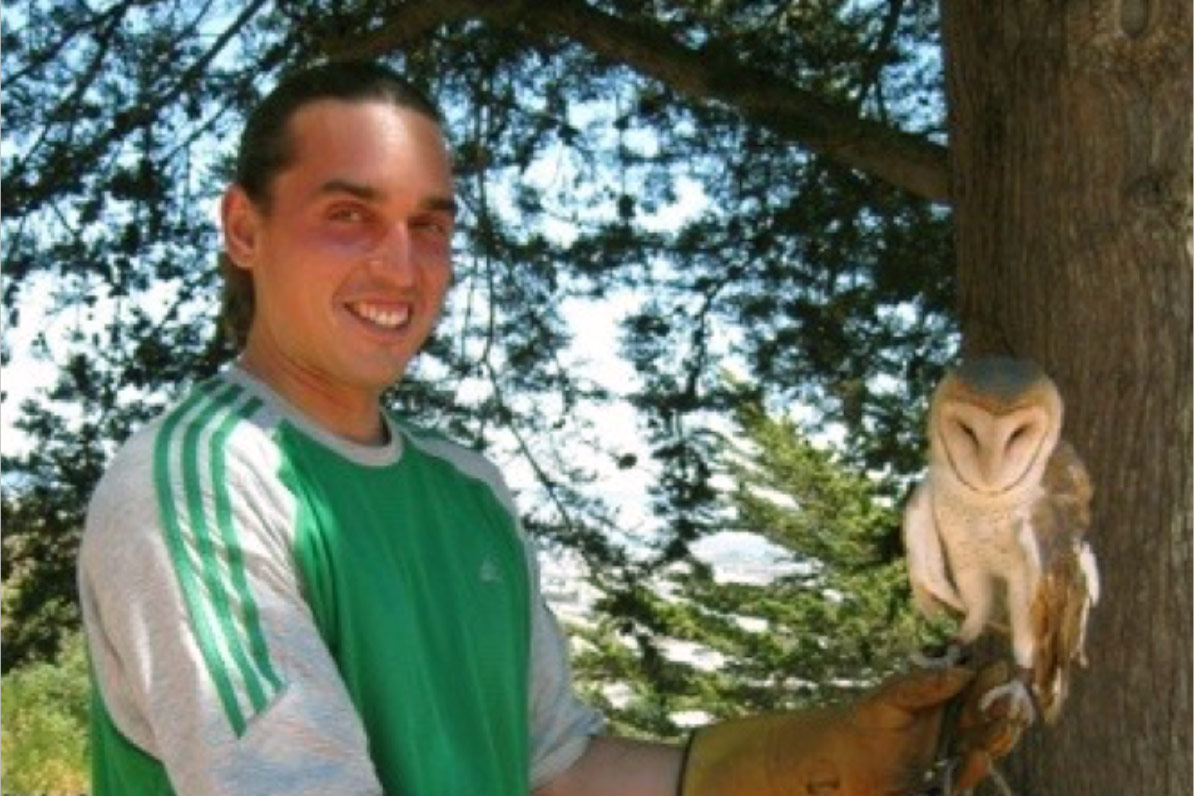 Dom works full time in the Live Animal Exhibit caring for animals, educating the public, and helping supervise the teen animal volunteers. He also does live animal presentations and bird walks on Corona Heights. A few years ago he earned the distinction of having The Big Year – he spotted the most species of birds in San Francisco in a twelve month period.